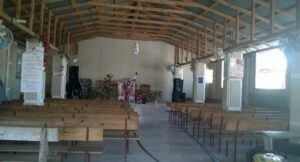 Sharing Real Hope is a non-profit organization, a legally incorporated 501c(3) in the state of Maryland as Hope International, Inc., since November 1993. The vision was born in the heart of founder Mike Hall in April 1990. During an unforgettable trip to Haiti a seed was planted that would eventually become Hope International, Inc. Watching the good people of Haiti struggle to do God’s work because of very limited resources, Mike was deeply impressed by the real needs.

It was clear that there were resources available in the U.S. that could help. With the help of several friends, Mike began raising money that enabled projects to go forward in Haiti. Buildings were improved, a well was drilled in a village, and equipment was purchased. In addition, children were fed and clothed. That relationship continues to this very day!

In 2017, the vision to reach beyond Haiti began to form in Mike’s heart.  His desire to teach the Bible and proclaim the Gospel through social media platforms started to take shape.  He created a YouTube channel and began recording podcasts.  Eventually, videos were added.  From there, Mike started doing Facebook Live broadcasts from his ministry page and boosting them to various countries in the “10/40 window” and to other African countries, as well as to Haiti.   The response has been phenomenal!  Our mission of Sharing Real Hope to the hurting, wherever we can, continues.

We are a nonprofit organization focused on sharing the hope of eternal life through Jesus, helping to make Haiti and the rest of the world a better place. Only with the help of our staff and giving people like you can we make this happen.

Are you passionate about what we’re doing? Let us know! We are always looking for volunteers to help us make our vision a reality. We’ll help you find a way to volunteer that best suits you. We’re excited to have you join the team!

Whether you help through monetary donations, volunteering your time, or spreading our mission through word-of-mouth, thank you. We couldn’t accomplish our goals without the help of supporters like you.