Deprecated: Cannot use "parent" when current class scope has no parent in /home/wxe20c6rmv2g/public_html/srhope/wp-content/plugins/ninja-forms/includes/Abstracts/Field.php on line 214
 It's NOT Just For Funerals!! - Sharing Real Hope

Probably the most popular chapter in the Old Testament is Psalm 23. It is regularly used during funeral services.Verse four – “Even though I walk through the valley of the shadow of death, I fear no evil, for You are with me…” – is, for many, a true comfort when grieving the loss of a loved one. 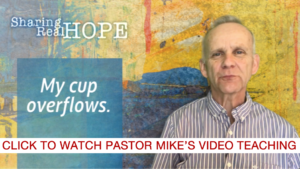 However, there is so much more to this Psalm than that!  It is a beautiful statement of God’s faithfulness to His children.  Taking imagery common in his culture, David portrayed the relationship between God and His children using the shepherd’s relationship to his sheep.

David knew much about that relationship.  As a young man, he was charged with the responsibility of caring for his family’s flock of sheep.  During the time of his shepherding, he had to kill a bear and a lion in order to protect the flock.  He learned dependence on God out there in the fields!  That really showed up big time when he confronted the giant, Goliath.  His father sent him to check up on his brothers in the army of King Saul, out confronting Israel’s enemy, the Philistines.  The big problem was a big man on the side of the Philistines, who regularly challenged the Israelite army to send someone to fight him.  No one, including King Saul, dared accept the challenge, until David came visiting.  That’s when David demonstrated to the King and his army what it was like to depend on God for victory!

All that came as a result of what David had learned as a shepherd himself, depending on the Good Shepherd!  When he wrote Psalm 23 later in life, he was simply rehearsing, in poetic form, what he personally knew to be true.  (Under the inspiration of the Holy Spirit, of course!)

The first verse in the Psalm gives us the theme.  Because God is my shepherd, I have no lack, and am completely content in Him!  The rest of the chapter is devoted to elaborating on that.

I encourage you to take some time to look at Psalm 23 again.  Examine it closely!  Let it’s message sink into your very soul.  Jesus is the Good Shepherd, who watches over His own and lovingly cares for them.  Don’t wait until a funeral service to hear it’s message!

For further study, click on THIS LINK to watch my video teaching on this great chapter!